SINGAPORE (The Straits Times/Asia News Network): Workers' Party chief Pritam Singh on Thursday (Dec 2) addressed the media on the resignation of Raeesah Khan during a press conference held at the party's headquarters in Geylang Road.

Here is the full text of his prepared remarks:

On Nov 2, the Workers' Party central executive committee agreed to form a disciplinary panel to look into the admissions made by Raeesah Khan in Parliament by way of personal statement on Nov 1, 2021.

In the course of its work, the disciplinary panel invited members of the party to share their views on the matter ahead of submitting its report to the CEC for deliberation.

Before the panel could submit its recommendations to the CEC on Nov 30, Raeesah tendered her resignation from the party, and by extension, resigned as a Member of Parliament.

As the CEC had not received her resignation in writing by then, it proceeded to deliberate the recommendations of the disciplinary panel. The CEC voted overwhelmingly that she would have been expected to resign on her own accord, failing which she would be expelled from the party.

There have been some queries from members of the public about the knowledge the party had about the original speech Raeesah delivered on Aug 3, and what action was taken thereafter. I will address these directly.

After Raeesah delivered her speech, and in the course of the days that followed, I asked Raeesah to make her best efforts to contact the victim, or to contact the individuals who brought the victim's case to her attention, and to extend the necessary information to Minister of State for Home Affairs Desmond Tan, who had sought more details on the matter in Parliament.

Initially, Raeesah stuck to her untruth in her communication with me.

After being repeatedly pressed, a number of new facts and disturbing personal revelations were disclosed. These concerned Raeesah's sexual assault, an event which was unknown to the party leadership at that time, and other related matters of a deeply personal nature.

Raeesah shared that her personal trauma and sexual assault explained why she was not truthful about accompanying the victim to the police station, as she had asserted in her speech on Aug 3. She admitted this to the party leadership about a week after she had delivered her speech.

Of immediate concern to me was the fact that Raeesah had not previously informed her family members of her sexual assault, which had traumatised her greatly.

In my judgment, it was important that she did so before she could fully address the reasons behind her untruthful conduct in Parliament, and to correct the record. In view of her sexual assault and my assessment of her state of mind, I was prepared to give her the space necessary to address the matter with her loved ones.

Raeesah came down with an episode of shingles in September and did not attend Parliament that month. It was nonetheless made known to her before the parliamentary sitting in October, that any parliamentary clarification on this matter was hers to make in her capacity as an elected Member of Parliament.

When questioned by the Minister for Home Affairs in Parliament on Oct 4, Raeesah repeated an untruth on the parliamentary record, which was wholly inconsistent with the revelations she had shared with the party leadership after Aug 3.

Almost immediately after Parliament adjourned in October, Raeesah agreed with the party leadership that she had to set the record right forthwith. I shared with her that it was the correct thing to do.

The next earliest opportunity to do so in Parliament was on Nov 1, when the member made the personal explanation under standing order 25.

Raeesah sent her resignation letter to me on Nov 30, 2021 and I replied to it by way of letter the next day.

I wish to end this statement by apologising to the residents of Sengkang for this turn of events. I also apologise to all victims of sexual assault who have been hurt over this matter.

For the party, public trust and confidence in a sitting Workers' Party MP is fundamental to the ethos of the party as a rational, responsible and respectable institution in Singapore politics.

Singaporeans have the right to expect the best efforts from Workers' Party MPs and we should never take their faith, trust and confidence in us for granted. 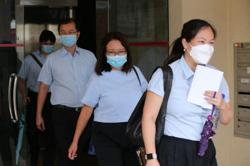