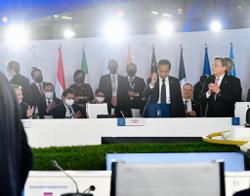 Italian Prime Minister Mario Draghi greets President Joko 'Jokowi' Widodo as he arrives for the G20 Summit at La Nuvola convention center in Rome on Oct 30. During the summit Indonesia took over the G20 presidency from Italy. - AFP

JAKARTA (The Jakarta Post/Asia News Network): Indonesia kicked off its year-long Group of 20 presidency on Wednesday (Dec 1), with President Joko 'Jokowi' Widodo saying that the “privilege” would be used to foster collaboration and push for major global breakthroughs.

In a prerecorded video speech streamed online and at the G20 presidency unveiling ceremony in Central Jakarta, Jokowi said the country sought to strengthen global solidarity in addressing climate change and sustainable development and get developed countries to raise their commitment to assisting developing countries.

He said the presidency would be used to strive for the aspirations and interests of developing countries in an attempt to create “a more just world order”.

Specifically, the 2022 programme will primarily focus on inclusive health care, digital-based transformation and the transition to sustainable energy.

“Collaboration is the answer for the future.”

The nation’s G20 presidency lasts until Nov. 30, 2022. As South-East Asia’s largest economy, Indonesia is only the sixth Asian country to lead the forum of the world’s biggest economies after South Korea, China, Japan, Saudi Arabia and Turkey.

This new global role comes at a time when the world is set to enter the third year of the Covid-19 pandemic, without a clear end in sight following the discovery of the Omicron mutation of the coronavirus, which is likely to set back the reopening of borders and global economic recovery.

Indonesia has already planned out its calendar of activities for 19 different cities nationwide in hopes that the international conferences held there would help buoy the local economy and prime the country for a swift recovery.

The country currently sits at 52nd place out of a 53-country ranking by Bloomberg on Covid-19 resilience, a "snapshot of where the virus is being handled the most effectively with the least social and economic upheaval".

“The new variant requires us to be timelier in preparing numerous health care facilities for every contingency,” he said at the kick-off event.

In assuming the G20 presidency, Indonesia will be able to determine “the direction of [these] global policy discussions”, the senior minister added.

Policy support To help policymakers with ideas like pandemic recovery solutions, several G20 engagement groups such as Think 20 (T20) have set their sights on engaging with G20 governments.

T20 brings together leading think tanks and research centres from around the world and is led by organisations from the host country, with the aim of contributing research and policy proposals to G20 leaders on big global governance issues.

In the year ahead, T20 will be co-led by the University of Indonesia Economy and Business School’s Social and Economic Research Institution (LPEM FEB-UI) and the Centre for Strategic International Studies (CSIS).

The Covid-19 response will remain high on the nation’s list of G20 agenda items, T20 Indonesia co-lead Djisman Simandjuntak said at a handover ceremony on Tuesday.

“The key question is how we recover under the Covid-19 restraints, particularly when we have this new Omicron variant spreading worries around the world. We will have to live with it – it is called risk-based recovery,” he said.

Crisis response Indonesia has followed a growing number of countries introducing new travel bans and has extended mandatory quarantine requirements from five to seven days, regardless of whether inbound passengers departed from countries with reported Omicron cases.

The government is also planning to impose stricter curbs ahead of the Christmas and New Year's holidays in hopes of preventing another infection spike. But with smart risk management, governments could still expect to recover, said CSIS senior economist Djisman, bearing in mind that many institutions have projected only a slight downturn for 2022.

“We at T20 will have to figure out how we can continue a concerted recovery [...] We need this to maintain a certain speed of economic recovery in the G20,” he said.

Former research and technology minister Bambang Brodjonegoro, another T20 colead, representing UI, said Covid-19 had restored the G20’s original role as a crisis response group, which it needed to play on top of its function as a global agenda-setting forum.

One of the government’s G20 cosherpas, Raden Edi Prio Pambudi, said collaboration was urgently needed to spark a stronger recovery.

“Collaboration and the role of scientists are essential; to explore and contribute to [the focus issues] and turn them into concrete actions and deliverables,” he said.

Paolo Magri, T20 Italy national coordinator who chaired the group under the European nation’s leadership, was hopeful that Indonesia’s G20 presidency would “keep pushing” leaders of the world’s largest economies to fully implement the proposals that think tanks have drafted.

“There is some degree of convergence in our policy areas, even if we have to admit that our ambition remains in many respects unfulfilled,” he said at the virtual event.

During Italy’s presidency, the engagement group managed to recommend the One Health approach and the G20 commitment to extending debt service suspension.

Magri said, however, that other initiatives, such as the introduction of global citizen income and wealth taxes on corporation stock, were not considered.

“All in all, some of our proposals were at least partially turning into reality,” he said. 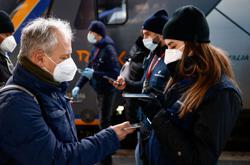 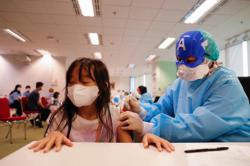