Residents of the northern city of Nam Dinh undergoing health checks before being vaccinated against Covid-19. - Vietnam News/ANN

HANOI, Nov. 30 (Xinhua): Vietnam reported 13,972 new Covid-19 cases on Tuesday, including 13,966 locally transmitted and six imported, according to its Ministry of Health.

Most of the community cases were detected in southern localities, including 1,497 in Ho Chi Minh City, 981 in Can Tho province and 860 in Ba Ria-Vung Tau province. The capital city of Hanoi recorded 367 new infections.

Over 122 million doses of Covid-19 vaccines, including nearly 51 million second shots, have been administered, according to the ministry.

As of Tuesday, the country has registered over 1.2 million locally transmitted Covid-19 cases since the start of the current wave in late April, the ministry said.

There are currently 5,788 patients nationwide in a serious condition, with 15 on life support (ECMO). 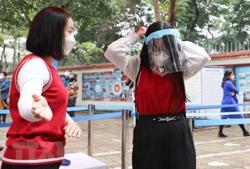