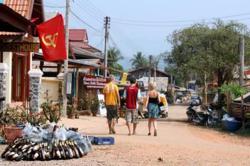 VIENTIANE, Nov 29: A French soccer player of Lao descent has been conferred with honorary Lao citizenship in order to compete for his homeland in the AFF Suzuki Cup 2020, Laotian Times.

A ceremony was held on 25 November at the Embassy of Laos in Paris, France, where Lao Ambassador to France, Yong Chanthalangsy, presented a Lao passport to Billy Ketkeophomphone.

Billy is a professional soccer player with the USL Dunkerque Club in Northern France.

He was born in Champigny-sur-Marne in France in 1990, beginning his career at the Paris Racing Club before attending Clairefontaine, a French national football academy in 2006. After a year, he moved to RC Strasbourg.

In 2011, Billy signed with FC Sion football club in Switzerland while in 2015 he played for Anger SCO, AJ Auxerre, then SO Cholet, before moving to USL Dunkerque.

Billy has been selected to play for the Lao national football team and will participate in the 2020 Asean Football Federation Championship, known as the AFF Suzuki Cup 2020.

The team will be coached by Selvaraj Vengadalam, a former Singaporean professional soccer player.