Passengers queue to check in for a flight on Singapore Airlines at O.R. Tambo International Airport in Johannesburg, South Africa, November 26, 2021. - Reuters

Update: President Biden has spoken out about the variant, taking to Twitter to write: "The @WHO has identified a new COVID variant which is spreading through Southern Africa. As a precautionary measure until we have more information, I am ordering air travel restrictions from South Africa and seven other countries.

"As we move forward, we will continue to be guided by what the science and my medical team advises. For now the best way to strengthen your protection if you're already vaccinated is to get a booster shot, immediately. For those not yet fully vaccinated: get vaccinated today. For the world community: this news is a reminder that this pandemic will not end until we have global vaccinations.

Previously: A newly-identified Covid variant known as B.1.1.529 has quickly rocked the economy and disrupted international travel. Stoked by fears of this mutating new variant that is thought to be more contagious than previous iterations, the DOW dropped by 900 points, or around 2.5%, when the markets opened on Friday, after being closed on Thanksgiving Day.

South African scientists are set to meet with W.H.O. experts today to reveal what information they know about B.1.1.529. Because it is so new, scientists aren't yet sure how vaccines will react against the variant. At this point, only a few dozen cases of B.1.1.529 have shown up in South Africa, Botswana, Belgium, Hong Kong and Israel.

Despite the quick movement of countries like the UK to ban travel, South Africa asked for more time before "rushed" action is taken.

"Whilst South Africa respects the right of all countries to take the necessary precautionary measures to protect their citizens, the UK's decision to temporarily ban South Africans from entering the UK seems to have been rushed as even the World Health Organisation is yet to advise on the next steps," the South Africa Ministry of International Relations and Cooperation wrote via a statement on their website. "Minister Naledi Pandor said: 'Our immediate concern is the damage that this decision will cause to both the tourism industries and businesses of both countries.'"

Meanwhile, the UK Secretary of State for Health and Social Care Sajid Javid gave a statement to Parliament today contextualizing what they know so far.

"We are concerned that this new variant may pose a substantial risk to public health," he said. "The variant has an unusually large number of mutations.

"It's the only variant with this designation, making it higher priority than Beta. It shares many of the features of the Alpha, Beta and Delta variants. Early indications show this variant may be more transmissible than the Delta variant and current vaccines may be less effective against it."

The news was first reported by The New York Times. - Reuters 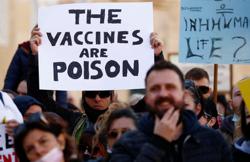