The meeting was co-chaired by Deputy Permanent Secretary (Policy and Strategy) at the Ministry of Defence Adi Ihram Mahmud and Department of Defence Assistant Secretary for South East Asia at International Policy Division David Lewis.

Both sides discussed bilateral defence matters pertaining to exchanges at various levels including courses, training and exercises as well as defence cooperation matters, including cooperation in the Asean Defence Ministers’ Meeting (ADMM) and ADMM-Plus initiatives such as the Asean Direct Communications Infrastructure (ADI), and the 4th cycle of the ADMM-Plus Experts’ Working Group on Military Medicine, which is currently co-chaired by Brunei Darussalam and Australia from 2021 to 2024.

The MoU serves as a framework for fostering closer defence relations and cooperation between the defence establishments and armed forces of both countries, such as courses and training, military exercises, exchange of information on matters pertaining to security and exchange of visits between the respective defence and military senior officials. 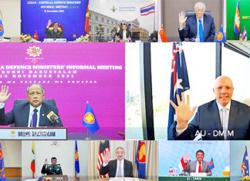