Qin Gang, China's ambassador to the United States, speaks in a video message that is aired in Houston, Texas, at a celebration of the 50th anniversary of Ping-Pong Diplomacy, on Nov 23, 2021. - Xinhua

HOUSTON (China Daily/Asia News Network): Qin Gang, China's ambassador to the United States, said that the story of "a small ball moving the big ball" ushered in the normalisation of Sino-US relations in the 1970s and profoundly changed the international political landscape.

"I sincerely hope that in 50 years' time, the two peoples, especially young people, will know more about Ping-Pong Diplomacy and learn from history," Qin said in a pre-recorded video message that was aired on Tuesday (Nov 22) in Houston, Texas, at a celebration of the 50th anniversary of Ping-Pong Diplomacy.

Qin noted that although China-US relations have gone through twists and turns and historic achievements have been made over the past 50 years, the ties have encountered serious difficulties in recent years.

"This is not in the fundamental interests of the two countries and peoples, and a better relationship between us is the shared expectation of the two peoples," Qin said.

Fifty years from the Ping-Pong Diplomacy, the China-US relationship is at a new crossroads.

"Fifty years from the Ping-Pong Diplomacy, the China-US relationship is at a new crossroads," he added.

"Today, the big ball of China-US relations still needs the small ping-pong ball to move it forward, from which we see the strategic vision, political courage and people's friendship reflected in Ping-Pong Diplomacy back then, and this is why our commemoration is highly relevant and significant for today."

US statesman Henry Kissinger, speaking in a video message, recalled that as national security adviser to former president Richard Nixon, he and the president had "ambivalent feelings" about the private initiative taken by the US table tennis team to get invited to visit China.

However, Kissinger noted, the visit went spectacularly well, with the athletes behaving like junior diplomats and their Chinese hosts being extraordinarily friendly and hospitable.

"So, the ping-pong team went to China on a self-appointed diplomatic mission and made a great contribution. I want the table tennis community to know that even the seemingly peripheral events can contribute to international understanding and to peace among two great nations," Kissinger said.

Gou Zhongwen, head of the General Administration of Sport of China and chairman of the Chinese Olympic Committee, and US Olympic& Paralympic Committee President Susanne Lyons also sent greetings via video.

"Let's learn from the history of Ping-Pong Diplomacy and re-create a new chapter for the new era. Let sports bridge the two peoples and bond us together through heart-to-heart friendship," Gou said.

As witnesses and participants of Ping-Pong Diplomacy, "we expect the bilateral relations will move forward in a healthy way to benefit both peoples," said Zheng.

Hoarfrost said she had played a virtual table tennis match with Liang during the pandemic and looked forward to meeting with Liang and Zheng next year at the World Table Tennis Championships in Chengdu, Sichuan province. She added that she hopes Ping-Pong Diplomacy will continue with the young generation.

"It's their legacy to carry it forward. So I say to them, compete fiercely, play joyfully, make friends and be a ping-pong diplomat," Hoarfrost said.

Sweeris shared with the audience her fond memory of meeting with then premier Zhou Enlai, who told the US athletes that "it's a great joy to greet friends from afar".

"That friendship has lasted 50 years, and my hope is that going forward, this friendship will be carried on by our current players and future generations," Sweeris said.

At the celebration, the four participants in the 1971 Ping-Pong Diplomacy were awarded for their contribution to US-China relations.

Then, to more cheers, Chinese table tennis contestant Fan Zhendong, who ranks No 1 in men's world rankings, teamed up with Sweeris and played against past WTTC champion Wang Hao and Hoarfrost.

"We value friendship, we value diplomacy, we want you to feel very, very welcome," Turner said. 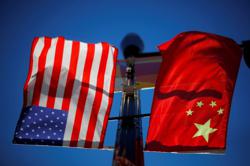