Twelve villages are in a prime location because of their proximity to the railway station and the Thanaleng Dry Port and Vientiane Logistics Park which will serve as a gateway between China and Asean. - VT

VIENTIANE (Vientiane Times/Asia News Network): Authorities have banned the sale of land in 12 villages in southern Vientiane after the government gave the green light for a private company to build a planned smart city.

The government has given permission for Duangchalern Development Construction Group Co, Ltd. to carry out a feasibility study on the development of a smart city in southern Vientiane over an area of 2,900 hectares.

Located near the First Lao-Thai Friendship Bridge, the smart city is intended to include an industrial zone that will produce goods for export using the Laos-China railway, which is scheduled to become operational next month.

The Vice Mayor of Vientiane, Phoukhong Bannavong, told Vientiane Times on Tuesday (Nov 16) it is not yet known when construction of the smart city will begin or how much funding is needed, as the company must first carry out a detailed study of the project.

“It doesn’t mean that all 2,900 hectares will be developed as smart city. The company will need to see the whole area, plan project activities, and look at how local people can take part in project development,” he said.

“We will look into the extent to which the project will affect local people and exactly how many hectares are needed for development. Everything depends on the outcome of the feasibility study.”

Last week, the Vientiane administration office issued a notice stating that the sale of land in 12 villages in Xaysettha and Hadxaifong districts was prohibited.

Authorities also banned the transfer of ownership, mortgage and construction, and even the digging of ponds on certain plots of land in the two districts, according to a two-page notice signed by the Head of the Vientiane administration office, Dr Phokham Xayasone.

People whose land is affected are being encouraged to work in cooperation with the project developer during the feasibility study.

Individuals and legal entities are prohibited from encroaching on or engaging in any type of activity on land that has been reserved for development.

Village authorities and local administrations are prohibited from signing documents approving any activity in relation to these land plots or facilitating any documentation process that contravenes the notice.

District authorities have been instructed to inform local people about the latest development and scope of the planned smart city, especially those who hold ownership rights to land plots.

The 12 villages are in a prime location because of their proximity to the railway station and the Thanaleng Dry Port and Vientiane Logistics Park which will serve as a gateway between China and Asean. 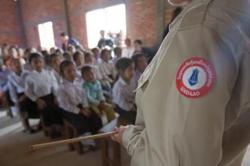