One year on, typhoon victims are still displaced and distraught 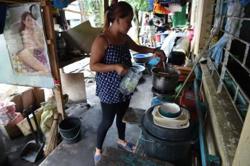 A YEAR after a powerful storm sent an avalanche of volcanic rock and sand crashing down, burying her house, Philippine food vendor Florivic Baldoza still lives in an evacuation centre.

Hundreds of families from poor villages around Mayon volcano in Albay province on the country’s most populous island of Luzon are waiting for new homes after Typhoon Goni pounded the region last November.

“That’s the strongest I’ve ever experienced,” said Baldoza, 40, standing on a mound of dark sand that now covers the house she once shared with her husband and two teenage daughters.

Several hundred thousand people fled as Goni barrelled towards the archipelago nation – ranked as one of the world’s most vulnerable to the impacts of climate change.

But some residents in San Francisco village, including Baldoza’s family, ignored warnings to shelter in a school, confident that a river dyke built several years ago would protect them from flooding.

As the most powerful typhoon to hit the country last year dumped heavy rain on an area still sodden from another cyclone a week earlier, Baldoza realised her family was in peril when water began cascading over the several metres high cement wall.

They bolted to her mother’s house across the road as a devastating mix of water, volcanic sand and boulders smashed the dyke further upstream and tore through the village.

Her husband Alexander survived by scrambling up a mango tree.

Holding on to a powerline to avoid being blown away by fierce winds, the family clambered over the top of several houses before reaching a taller building.

It is not the first time excessive rain has forced Baldoza to relocate.

About 23 years ago, before Baldoza got married, her mother sold their house in a flood-prone area of the same village and moved the family to higher ground.

“We didn’t expect that we would experience the same thing,” she said.

“I don’t think there’s a safe place anymore. Wherever we go, we get flooded.”

“I’m worried that the next generations won’t have a good future,” he said. — AFP 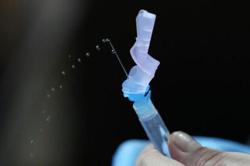