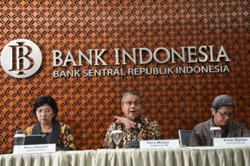 JAKARTA (The Jakarta Post/Asia News Network): Bank Indonesia (BI) has extended its relaxed repayment terms for credit card debt to the end of the second quarter next year to support economic recovery efforts.

Under the relaxed rules, minimum payment has been cut from 10 perc ent to 5 per cent of the outstanding credit balance.

“[We are] extending the credit card policy until June 30, 2022,” BI Governor Perry Warjiyo said in a statement dated Oct 19.

Introduced in May 2020 and extended for the first time later that year, the rule is in line with the central bank’s eased monetary and loan provisioning policies, aimed to increase the disbursement of bank loans.

The BI 7-Day Reverse Repo Rate since February has remained at 3.5 per cent, the lowest benchmark rate in the country’s history, in a move deemed important to enhance economic recovery.

In addition, BI recently extended a temporary relaxation of down payment requirements for automotive loans and housing mortgages until Dec 31, 2022.

The central bank had introduced the relaxed rules in February for an initial period from March to December this year.

BI spokesman Erwin Haryono said the decision to extend the eased credit card rule had considered the economic condition of households during the Covid-19 pandemic, adding that the central bank would periodically evaluate the policy.

“This policy will always be evaluated by looking at the current economic condition of the public and [their] financial condition,” Erwin said on Friday as quoted by Kontan.