Food inflation edged up by 1.6 per cent, up from 1.5 per cent the previous month.- ST

All-items inflation rose to 2.5 per cent in September on a year-on-year basis, up slightly from 2.4 per cent the month before.

Meanwhile, core inflation, which excludes accommodation and private road transport costs, edged up to 1.2 per cent last month, from 1.1 per cent in August.

This increase was largely driven by higher food prices, said the Monetary Authority of Singapore (MAS) and the Ministry of Trade and Industry (MTI) in a joint release on Monday (Oct 25).

Core inflation, which better captures the underlying trend in consumer prices, is the measure that MAS monitors most closely in its review of Singapore's monetary policy.

In September, the cost of electricity and gas rose more sharply, by 9.9 per cent - due to the larger increase in average electricity prices paid by households under the Open Electricity Market - compared with 9.7 per cent in August.

Food inflation edged up by 1.6 per cent, up from 1.5 per cent the previous month, as the prices of non-cooked food and prepared meals rose at a slightly faster pace.

Accommodation costs also picked up more strongly at 1.9 per cent, up from 1.7 per cent, as housing rents rose at a faster rate.

Private transport inflation remained unchanged at 10.8 per cent as car prices rose at a pace similar to that in August. While there was a stronger price increase for motorcycles, it was broadly balanced out by the steeper decline in other private transport costs, MAS and MTI said.

Likewise, services costs remained stable at 1.2 per cent as the pickup in inflation for holiday expenses and hospital services was broadly offset by lower inflation for point-to-point transport services as well as recreational and cultural services.

The cost of retail and other goods fell at the same pace, at minus 1 per cent. The smaller drop in the prices of clothing and footwear was broadly offset by lower inflation for personal effects and the greater decline in the prices of non-durable household goods.

Singapore has not been immune to the "perfect storm" of broken supply chains, labour shortages, energy crunch and a rebound in global demand as countries open up from Covid-19 lockdowns that is driving up prices around the world.

MAS tightened its monetary policy sooner than expected on Oct 14, saying it expects rising inflation and aims to ensure price stability over the medium term. For local consumers, the move means inflation may not rise as high as it could as a stronger Singapore dollar may partly offset the rising costs of imports.

On Monday, MAS and MTI maintained inflation expectations at the upper end of their forecast ranges for 2021.

For 2021 as a whole, core inflation is seen coming in near the upper end of the 0-1 per cent forecast range and is projected to increase further to 1-2 per cent in 2022.

All -items inflation is forecast to come in around 2 per cent this year and average 1.5-2.5 per cent next year.

MAS and MTI said that global inflation has remained elevated and "is likely to persist for some time".

"As the global and regional recoveries progress, underlying inflation in Singapore's major trading partners should also gradually increase," they added.

Wages have also picked up and are anticipated to rise at a steady pace as slack in the labour market dissipates.

Amid construction delays, accommodation inflation should remain firm, but private transport inflation is likely to moderate next year on the back of a slower pace of increase in COE premiums and petrol costs, MAS and MTI said.

OCBC Bank chief economist Selena Ling said if businesses continue to gain confidence to pass on their higher cumulative cost pressures to end-consumers, “it could potentially spur a wage-price spiral although this is not our baseline scenario yet”.

But given the inflationary pressures, MAS may further tighten its Singdollar policy at the next review in April 2022, she added.

Longer term, Ling pointed to the planned expansion of the Progressive Wage Model next year, a GST hike to come, a potential wealth tax to address growing income inequality and the need to raise the carbon tax to better combat climate change as potential cost pressures ahead, albeit the timing of most of these measures are not yet confirmed. 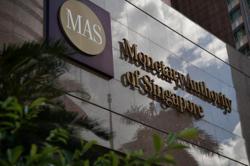