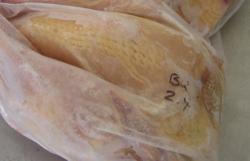 The Kingdom in June lifted a ban on the import of frozen meats and other frozen items classified as ‘high-risk’ originating from India. - AFP

PHNOM PENH (The Phnom Penh Post/Asia News Network): Cambodia is looking to end a requirement for samples of frozen Indian meat imports to be collected and tested for the novel coronavirus, due to the low incidence of the pathogen on recent shipments, as well as improvements in the South Asian country’s epidemiological situation.

This and other decisions were reached at a virtual Oct 20 meeting of an ad-hoc commission in charge of preventing the spread of SARS-CoV-2 – the pathogen that causes Covid-19 – through “high-risk” goods originating from countries with a perceived high prevalence of the disease.

Kun Nhim, director-general of the General Department of Customs and Excise of Cambodia (GDCE) and chairman of the commission, said only three of 150 containers of frozen meat imports had been found “positive” and incinerated in late July.

He said a working group, tasked with monitoring and assessing the Covid situations of major frozen meat exporters to Cambodia, reported that infection rates had seen significant declines, reducing the potential risk of shipping chilled goods contaminated with the coronavirus.

The meeting agreed and decided to put in a request for in-principle decision from “the leadership” on a number of points, such as ending the sample-testing requirement for frozen Indian meat imports.

It also asked to maintain a requirement for letters or other certificates from the competent authorities of India to be attached to frozen meat consignments, confirming the absence of the coronavirus on the merchandise.

The meeting also decided to conduct only the Covid-standard sanitary and other health measures on chilled and frozen goods imported from neighbouring countries, which includes spraying disinfectants on the goods’ packaging and means of transportation.

Oct 25 was set as the tentative date of implementation for the adjusted measures, with even more Covid safeguards to be removed on Jan 1, on a country-specific basis, if the pandemic allows.

An explosion in cases linked to new variants of SARS-CoV-2 reported by India in April-May – averaging between 300,000 and 400,000 a day – prompted the Kingdom to impose a ban on May 1 on the import of frozen meats and other chilled items classified as “high-risk” originating from the South Asian country, in an attempt to stave off the spread of the virus and its more troublesome mutations.

The government lifted the ban a month later, amid improvements in India’s Covid-19 outbreak and as all samples of frozen meat imports had tested negative for the coronavirus, according to a June 19 GDCE letter.

While the ban may have been scrapped, a number of temporary safeguards were introduced as part of Covid-19 response efforts, the GDCE said, conceding that the move could affect imports from every source.

“We cannot close the free market, but on behalf of the association, I would like to ask the authorities to precisely control the quantity and quality of the meat that must be allowed to be imported,” he told The Post on Oct 24.

He said it is usually very easy to import meat and live animals from neighbouring countries, but stressed that exports in the opposite direction are “almost non-existent”, even through informal channels.

Cambodia imported $17.7 million worth of buffalo meat from India in 2020, which was over 170 per cent higher than the $6.4 million logged in 2019. Buffalo meat imports accounted for 12.28 per cent of bilateral trade between Cambodia and India, according to embassy statistics.