About 250 passengers arrived in Singapore yesterday morning on the first two flights under the expanded quarantine-free travel scheme for travellers vaccinated against Covid-19.

Flight SQ329 from the Netherlands, operated by Singapore Airlines, touched down at Changi Airport at about 6.35am with about 80 passengers on board.

About an hour and a half later, SQ317 from London landed with about 170 passengers.

The Straits Times team at Terminal 3, where the flight landed, noticed that those who arrived were mainly single travellers or couples. There were at least three families with children and an equal mix of Asians and Caucasians.

Movement controls were tight at the arrival hall. Passengers were directed through an area cordoned off from the public.

They were seen being ushered by airport staff who were clad in disposal gowns, masks and gloves to take a Covid-19 polymerase chain reaction (PCR) test before being directed to a specific taxi stand or pick-up point for their transport out of the airport.

Family members or friends who had come to receive passengers were told to wait in a separate area.

After meeting the passengers, those who drove had to take one of two lifts – not accessible to other members of the public – to get to the carpark.

One of Flight SQ329’s passengers, Paul Wolhoff, 58, said he was in Singapore with his wife Winnie Yeo, 59, to attend his mother-in-law’s funeral and visit their relatives.

“Normally we visit (Singapore) every year during Chinese New Year and sometimes on other occasions,” the banking consultant said.

But the Dutch nationals could not do so due to the pandemic, with the last time they were here being early last year.

Wolhoff said they initially intended to make use of the travel scheme to visit Singapore again during next year’s Chinese New Year, but had to bring forward their trip after his mother-in-law’s death.

The Netherlands is among eight countries that Singapore opened up Vaccinated Travel Lanes (VTLs) to from Tuesday – the republic’s biggest move to reopen its borders since the Covid-19 pandemic.

The other countries are the United States, Canada, Denmark, Britain, France, Italy and Spain.

Singapore had earlier opened up VTLs to Germany and Brunei on Sept 8.

But they must take a PCR test before departure and when they land at Changi Airport.

The eight countries that Singapore opened up to from Tuesday, as well as Germany, have also allowed travellers from the republic to fly over on any flight without having to serve quarantine there.

The first VTL flight from the US, SQ23, has departed from New York and is expected to land here at 5.20am today.

Tina Di Cicco, a passenger on the flight, said she and her husband were returning to Singapore after visiting their two sons in New York.

“The VTL opened a world of possibilities for people to see their families and do business again,” she said.

“Despite the uncertainties and challenges of planning and preparing for travel, I think it’s well worth it and it’s a sign of hope that things will be invigorated soon.” — The Straits Times/ANN 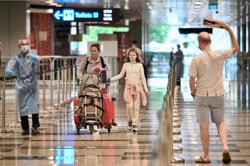