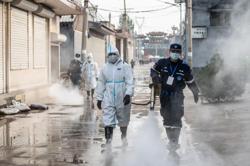 BEIJING: Rare floods that have ravaged areas along the middle and lower reaches of the Yellow River since last month were caused by heavy rain that has not been seen in the region at this time of year for decades.

Related departments in areas along the river should ensure the flooding causes no deaths, Water Resources Minister Li Guoying said during a visit to Shandong province.

In the next few weeks, most of the Yellow River Basin is expected to have 10% to 20% more precipitation than normal years, the National Climate Center said last week.

On Oct 5, the lower reaches of the Yellow River in Shandong experienced their heaviest autumn flooding in the past 36 years.

From Sept 27 to Oct 5, the Ministry of Water Resource’s Yellow River Conservancy Commission released three alerts for flooding along the river as the amount of water flowing downstream each second exceeded the warning level.

The recent severe floods in Shanxi have affected 1.75 million people and damaged more than 17,000 houses.

The National Climate Center said that heavy autumn rain in West China caused the Yellow River Basin to flood in September and October.In September, precipitation in the basin hit its highest level during the same period since 1961 and was nearly triple that of normal years, the centre said.

Autumn rain in western China, a regular weather pattern, usually lasts from September to November and leads to autumn rainy seasons in Chongqing and the provinces of Sichuan, Yunnan and Guizhou.

A typical case was the autumn rain in 2003 that caused more than 10 rounds of flooding in the mainstream and tributaries of the Yellow River from August through October. Shandong and Henan were severely affected.

“This year’s autumn rainfall in the basin was similar to that in 2003, but heavier,” the National Climate Center said. — China Daily/ANN 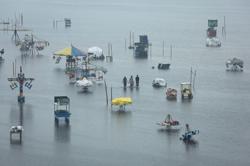