INDONESIA, Malaysia, the Philippines and Singapore pushed for a harder stance against Myanmar junta leader Min Aung Hlaing at a “tense” meeting that decided to exclude him from a regional summit this month, four people with knowledge of the talks said.

South-East Asian ministers were divided between sticking to a tradition of non-interference and the need to retain credibility by sanctioning the coup leader, who has led a bloody crackdown on dissent since seizing power from Myanmar’s civilian government on Feb 1, the sources said.

In the end, it was the chair Brunei, with majority backing, that chose to keep him from attending the virtual Association of South East Asian Nations (Asean) leaders’ summit set for Oct 26 to 28, and invite instead a “non-political representative” from Myanmar.

The decision broke with Asean’s decades-long policy of engagement and non-interference in the affairs of member nations.

“The mood in the meeting had never been more tense,” said one of the people with knowledge of the discussions.

“If you asked me if Asean would do something like this a year ago, I would have said it would never happen,” said a regional diplomat.

Singapore Foreign Minister Vivian Balakrishnan said on Twitter the outcome of the meeting was a “difficult but necessary decision to uphold Asean’s credibility”.

Philippines Foreign Minister Teodoro Locsin said before the meeting that the bloc could no longer afford to take a neutral stance on Myanmar, adding that if it relented, “our credibility as a real regional organisation disappears... We’re a bunch of guys who always agree with each other on the worthless things”.

International pressure has been mounting on Asean for a harder line against Myanmar’s failure to take agreed steps to end violence, allow humanitarian access and start dialogue with its opponents.

The grouping’s perceived ineptitude has sparked outrage in Myanmar, with some anti-junta protesters burning the bloc’s flag. — Reuters 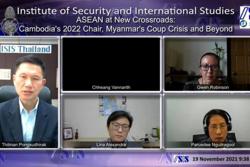