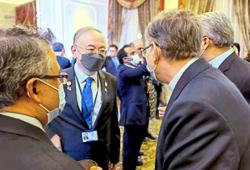 BANGKOK (The Nation/Asia News Network): The Cabinet on Tuesday (Oct 19) decided to team up with the Chinese government to promote the Thai film industry in order to boost trade, investment and tourism in the country.

Deputy government spokesperson Ratchada Thanadirek said that the Cabinet has okayed the drafted memorandum of understanding (MOU) of the collaboration between Thailand's Ministry of Culture and China’s Film Bureau. This MOU will be signed at the beginning of 2022 and the collaboration will be organised for 5 years, she added.

Ratchada also said that under the MOU, films co-produced by the two countries will be allowed to screen in China, regardless of the quota of foreign films in the country.

China’s film market was the second biggest in the world, following the US market, with total sales of a cinema ticket in 2019 at 64.2 billion yuan, or 337.05 billion baht.