JAKARTA, Oct 18 (Jakarta Post/ANN): Indonesia booked a slowdown in exports in September as demand for its commodities fell. Imports and the trade surplus also slowed.

The slowdown came after the country posted a record-breaking trade surplus and exports in August. In trade figures published on Friday, Statistics Indonesia (BPS) reported exports worth US$20.60 billion for the month of September.

While that is up 47.64 per cent year-on-year (yoy) following the drastic decline in trade in the early period of the coronavirus pandemic, it marks a slowdown from the 64.1 per cent annual growth logged in August.

This resulted in a trade surplus of $4.37 billion, down 8 percent from the record-breaking figure recorded in August. “The value [of non-oil and gas] exports fell 3.38 percent [month-to-month],” BPS head Margo Yuwono said in an online press briefing on Friday, adding that the decrease was driven by lower volumes of exports rather than by lower prices.

“This means there was a fall in demand from trade partners.”

Non-oil and gas goods accounted for some 95 per cent of Indonesia’s exports in September.

The slowdown follows record exports in August, when Indonesia reaped the benefits of the global economic recovery and rising prices of commodities, especially coal, the country’s main export commodity.

The price of Indonesian oil also rose by a staggering 92 percent to US$72.20 a barrel in September from a year earlier, according to Margo.

Prices for some commodities, such as rubber, copper and gold, fell in September. The mining industry led export growth in September at 183.59 percent yoy, followed by oil and gas, and manufacturing.

Agriculture, forestry and fishery exports contracted 4.96 percent to $390 million in September from a year earlier.

Imports, meanwhile, dropped 2.67 percent in the month of September, or 1.8 percent when excluding oil and gas products, with machinery imports posting the steepest monthly decline.

Faisal Rachman, an economist at state-owned publicly listed Bank Mandiri, said the annual export and import growth figures were below the market consensus forecast at 51.29 percent and 49.75 percent, respectively.

The trade surplus, despite the drop from the previous month, was 13.21 percent above the consensus forecast.

“[Over] the first nine months of the year, the trade balance posted a US$25.07 billion surplus, almost double the surplus recorded during the same period a year ago, which was US$13.35 billion,” Faisal said in an analysis that has been released. - Jakarta Post/ANN 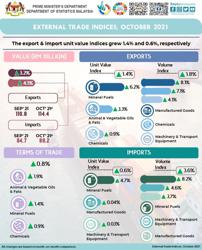