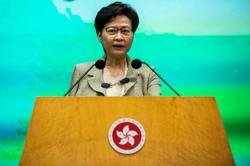 Hong Kong leader Carrie Lam Cheng Yuet-ngor left Queen Mary Hospital at about 9am on Tuesday after suffering an elbow fracture in a fall at her official residence.

A government source said Lam had fallen down the stairs at Government House around dinner time on Monday night, describing the injury as “not very serious” despite the minor fracture.

“I don’t think the injury will affect her daily life or work,” the source said. “She is on sick leave today and therefore has to cancel all meetings and events.”

Lam, whose arm was in a sling as she left the Pok Fu Lam facility, had sought hospital treatment and was diagnosed with a minor right elbow fracture, according to a government statement released on Monday night. She stayed overnight for observation at her doctor’s request.

A regular Tuesday meeting of her de facto cabinet, the Executive Council, and the preceding media session would be cancelled, the statement said, with Chief Secretary John Lee Ka-chiu, the city’s No 2 official, to temporarily serve as acting chief executive.

Dr Wong Sze-hung, a private specialist in Orthopaedics and Traumatology, said the standard treatment for an elbow fracture was to apply a plaster cast along with an arm sling to prevent displacement of the fracture.

“Usually, patients will have X-rays on a biweekly basis to ensure the fracture is healing well within six to eight weeks,” he said.

“[A] more important message is that she is a 64-year-old lady, who has suffered a fracture ... suggesting she could possibly suffer from osteoporosis.”

Wong suggested Lam have a bone-density scan to look for any signs of the health condition.