Police and forest rangers encountered a group of poachers while patrolling through a forest outside Kon Doc village, located in a remote area of Vietnam’s central highlands around seven hours south of Da Nang, Ngo Vinh Phong, a senior forestry official in Quang Ngai province, said.

Upon seeing the rangers, the poachers fled into the forest, leaving behind their motorbikes, gas cylinders, 53 lead bullets, mufflers and five dead grey shanked douc langurs, each of which weighed between 5 and 15 kilogrammes..

According to Frankfurt Zoological Society, some 1,000 grey shanked doucs have been found in forests across five of Vietnam’s provinces, from coastal regions up to the central highlands. The species has also been spotted in Laos and Cambodia.

Primate skeletons, tiger bones and rhino horns feature in Vietnam among the primary ingredients in traditional medicine, which many people believe improves health and strength.

Under Vietnamese law, anyone caught killing animals listed in the IUCN red book can face up to 15 years in prison and a fine up to 2 billion Vietnamese Dong (US$88,000). - dpa 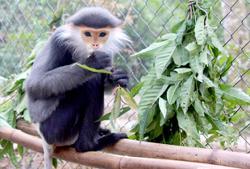