Ma Xiaoguang, a spokesman for the Taiwan Affairs Office of the State Council, said that under the guise of so-called consensus and unity, Tsai had on Sunday attempted to kidnap public opinion in Taiwan and collude with foreign forces for her purpose of “independence”.In terms of the current cross-Straits relations, Tsai said her position remained the same in “maintaining the status quo”, but she would not bow to “pressure”.

Ma said, “Tsai’s so-called maintaining the status quo is nothing but an attempt to deceive the world.”

The ruling Democratic Progressive Party authority’s provocations to seek “independence” remained the source of tension in cross-Straits relations and the biggest threat to peace and stability in the Taiwan Straits, Ma said. — China Daily/ANN 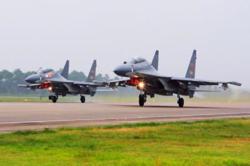