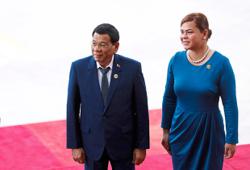 The country’s week-long registration for candidates in the 2022 election closed on Friday without an application from President Rodrigo Duterte’s daughter, disappointing many of her supporters, who up to the last minute were egging her to run.

Sara Duterte-Carpio, 43, thanked her supporters but maintained she was running for mayor of Davao, the Philippines’ third largest city, a position she has held twice since she succeeded her father as local chief executive in 2016.

“I am presenting myself to the Dabawenyos as mayor for the third and last time in my life as a politician,” Duterte-Carpio posted on her official Facebook page on Friday.

Dozens of supporters wearing green, the colour associated with Duterte-Carpio, flocked near the registration venue, carrying banners and waving little green flags at vehicles passing by.

#RunSaraRun2022 was among the top trending hashtags on social media in the Philippines.

Under election rules, candidates have until Nov 15 to withdraw and then apply for another position, or file as a substitute contestant, leaving plenty of room for surprises, similar to Duterte’s last-minute presidential entry in 2015.

Without Duterte-Carpio in the running, five presidential contenders, including Vice President Leni Robredo, son of later dictator Ferdinand Marcos, and former boxing champion Manny Pacquio, will face off in next year’s polls.

Duterte had wanted his daughter to run alongside his long-term aide, Senator Christopher “Bong” Go, who is running for vice president under the ruling PDP-Laban party.

But it was Duterte’s police chief, Senator Ronald dela Rosa, who submitted his candidacy for president under the ruling party’s banner, in another twist in the Philippine election. — Reuters 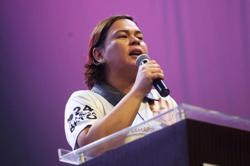 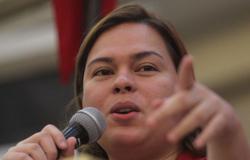