PHNOM PENH, Oct. 9 (Xinhua): Cambodia's three-day Pchum Ben public holiday had come to an end with over 664,000 people traveling to various tourist attractions after the majority of the population had been inoculated against Covid-19, according to Cambodia's Tourism Ministry on Saturday.

Pchum Ben festival, or honoring-the-dead festival, from Tuesday to Thursday, is one of the largest religious festivals in the Southeast Asian nation.

Tourism Minister Thong Khon said among the tourists are about 660,000 locals and 4,700 foreigners living in the country.

"All tourism sites in the kingdom's 25 cities and provinces had been opened to welcome tourists during the three-day break," he said in a report released to the media.

Most travelers had followed health measures to prevent Covid-19 transmission, however, physical distancing remained a problem, he said.

The most popular destinations were the coastal provinces of Kampot, Kep and Preah Sihanouk, and the cultural province of Siem Reap, among others.

Cambodian Prime Minister Samdech Techo Hun Sen said on Friday that allowing people to travel freely during the Pchum Ben holiday was a test of the kingdom's success or failure in the Covid-19 battle.

"If within the coming 10 to 15 days, the situation is stable and the number of new infections and deaths is still the same as the current level, I think it'll be time to reopen the economy and society in all domains, but in the new normal by complying with the three do' s and three don'ts," he said during a weekly cabinet meeting.

Cambodia reported a daily record of 220 new Covid-19 cases on Saturday, pushing the national total caseload to 114,571, the Ministry of Health (MoH) said, adding that 23 more fatalities had been registered, taking the overall death toll to 2,482.

The South-East Asian nation launched a Covid-19 inoculation drive in February, with China being the key vaccine supplier.

To date, the country had administered at least one vaccine dose to 13.45 million people, or 84 percent of its 16-million population, according to the MoH.

"According to an observation, two-thirds of the dead persons had not been vaccinated," the prime minister said.

Meanwhile, Labour Minister Ith Samheng encouraged the employers of factories and enterprises to prepare Covid-19 rapid test kits to do rapid test for their workers when they return to work after the Pchum Ben break.

"This Covid-19 rapid test is on a voluntary basis and there is no fine for owners or directors of factories and enterprises as well as employees," he said. - Xinhua 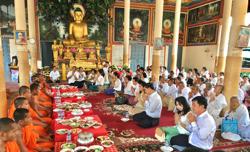