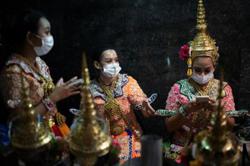 This picture taken on September 21, 2021 shows Cape Singh beach as seen from the Laem Sing viewpoint in Phuket, as tourists take advantage of the "Phuket Sandbox" programme for visitors fully vaccinated against the Covid-19 coronavirus. - AFP

BANGKOK, Sept. 27 (Xinhua): Thailand has administered more than 50 million doses of Covid-19 vaccine, with more than 25 per cent of its nearly 70 million population having been fully vaccinated, according to the CCSA.

Previously, the Bangkok municipal authorities said the city would reopen without quarantine after at least 70 percent of its residents had been fully vaccinated.

Thailand on Monday confirmed 10,288 new cases and 101 additional deaths, raising the total number of infections and fatalities to more than 1.57 million and 16,369 respectively since the pandemic began, according to the CCSA.

Meanwhile, Thailand on Monday (Sept 27) announced a plan to waiver mandatory quarantine requirement for fully-vaccinated visitors arriving from November in capital Bangkok and certain tourism hotspots in nine other regions, amid efforts to revive the ailing tourism sector and economic growth.

The South-East Asian country planned to reopen Bangkok and some tourist destinations such as Krabi, Hua Hin, Pattaya and Koh Phayam, following the reopening of Phuket and Samui islands in pilot schemes since July, according to the Center for COVID-19 Situation Administration (CCSA), the country's Covid-19 task force.

Nationwide, the CCSA planned to halve the mandatory quarantine period for fully-vaccinated visitors arriving from Friday to seven days, and reduce it to 10 days for those that have not finished vaccination.

The CCSA also decided to further ease restrictions from Friday in 29 regions under maximum control, including Bangkok, to allow more businesses and venues such as spas, cinemas, libraries and indoor sports venues to reopen with certain requirements, and shortened the night-time curfews by one hour.

These measures will be submitted to the cabinet for approval Tuesday (Sept 28).

This came as the government strove to revive the country's pandemic-battered economy. The tourism sector, which accounted for about one-fifth of the country's GDP growth before the pandemic, has been hit hard after more than one year of border control. Foreign tourist arrivals plunged to 6.7 million in 2020 from a peak of nearly 40 million in 2019.