Protesters hold umbrellas with an anti-Marcos slogan during a demonstration at a park in Manila on Aug14, 2016, against plans to honour the late dictator Ferdinand Marcos with a state burial. - AFP

MANILA (Philippine Daily Inquirer/Asia News Network): The current learning setup under the Covid-19 pandemic presents a “good opportunity” to teach young students about the realities of martial law, a government agency tasked to honour its victims said on Sunday (Sept 26).

“Students no longer have textbooks [under the modular setup] so the new battleground is on the internet,” Human Rights Violations Victims Memorial Commission (HRVVMC) chair Chuck Crisanto said.

“Through this platform, we’re now able to reach more students.”

Both decried the persistence of false narratives about the Marcos regime from 1972 to 1986, many of which gained traction anew after former Sen Ferdinand 'Bongbong' Marcos Jr announced his presidential bid in 2022 last week.

For Crisanto, this was in part because of the failure of the education system to teach the atrocities of martial law sufficiently.

He recalled how several textbooks used under the K-12 programme were found to have peddled falsehoods or half-truths about the martial law years.

While the internet is seen as the purveyor of fake news, Crisanto said it also gave educators a new chance to present facts about this foregone era.

“We need to reach this demographic the most because they never lived through martial law,” he added.

The HRVVMC was created in 2013 to grant reparations and recognition for the victims of martial law.

Part of its mandate is to correct collective memory about what happened between 1972 to 1986.

As such, it regularly stages educational campaigns, including online Wikipedia editathons, to rectify misinformation about the late dictator Ferdinand Marcos’ regime.

Crisanto noted that their campaigns and online pages often get hundreds of thousands of engagements, illustrating how the internet can also be used for correct information.

The commission is also looking forward to the construction of a martial law museum within the grounds of University of the Philippines.

The said museum, he said, hopes to serve as a concrete reminder of the horrors endured by martial law victims, and would contain memorabilia from important figures during the era. 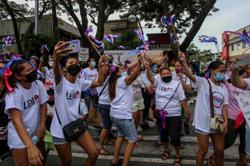