MANILA, Sept 27 (Philippine Daily Inquirer/ANN): The daily increase in Covid-19 cases in the country has again breached the 20,000 mark on Sunday (Sept 26), as the Department of Health (DOH) recorded 20,755 new infections.

This number of new cases accounts for 21.9 percent of the 74,460 individuals tested, bringing the total confirmed infections to 2,490,858 since the virus first hit the country last year.

Meanwhile, the death toll remains at 37,405 after the DOH has once again reported no new deaths due to a technical glitch. This is the third consecutive day no deaths have been reported by the DOH.

“No deaths were reported today due to technical issues in COVIDKaya. The Department of Information and Communications Technology is currently addressing issues encountered by the system,” said the DOH.

“When the issue is resolved, the succeeding increase in deaths in the following reports will be due to the previous days’ backlogs,” it added.

The overall number of recoveries, on the other hand, has increased to 2,292,006, after registering 37,405 additional recoveries.

This puts all active Covid-19 infections at 161,447 nationwide, which currently accounts for 6.5 percent of the total number of infections.

However, two laboratories were not able to submit data to the COVID-19 Document Repository System in the total tests conducted on September 24, the DOH said. These two labs contribute, on average, 0.1 percent of samples tested and 0.1 percent of positive individuals.

The health agency also noted that 72 duplicates were removed from the total case count, of which 63 are recoveries.

The DOH also reported that 75 percent of ICU beds, 65 percent of isolation beds, 68 percent of ward beds, and 54 percent of ventilators are currently in use across the country during the Covid-19 pandemic.

In Metro Manila, meanwhile, occupied ICU beds are currently at 76 percent, isolation beds at 55 percent, ward beds at 64 percent while 57 percent of available ventilators were also being used in the region, said DOH. - Philippine Daily Inquirer/ANN 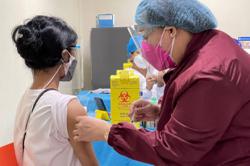