Some 200,000 people are expected to be vaccinated by September-end.

Dr Chalermpong Sukhonthaphon, the director of Vachira Phuket Hospital, said all vaccination centres in the province on Saturday had kicked off the vaccination operation by using only 60 per cent of total vaccination capacity.

"Therefore, we have a plan to accelerate the vaccination in order to enable people in the province to receive their third jab as soon as possible," he said.

He added that people living or working in Phuket can register for the third jab between September 25-30 via the Phuket Tong Chana (Phuket must win) website.

Meanwhile, Veerachai Pranveerapaiboon, CEO of The Attitude Club, said he was very glad that he was among those in the first group who had received the third jab using intradermal injecti

He said he had confidence in the safety of the method, while asking other people to receive their jab in a bid to boost their immunity against Covid-19.

Intradermal injection is a method commonly used in botox and rabies vaccinations. This injection needs a lower vaccine dose than an intermuscular one, but it gives equal immunity.

This method had been approved by several public health-related agencies, such as Vachira Phuket Hospital, Chulalongkorn University, Chulabhorn Royal Academy, Prince of Songkla University and medical schools in the Netherlands. - The Nation Thailand/ANN 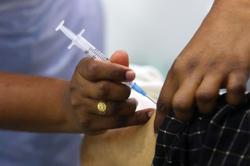