YANGON, Sept 26 (Xinhua): The daily Covid-19 testing positivity rate was registered at 8.53 per cent in the past 24 hours in Myanmar, with 1,546 new Covid-19 infections, according to a release from the Ministry of Health on Saturday night (Sept 25).

According to the release, over 4.22 million samples were tested for Covid-19 and the number of virus positive cases has risen to 456,620 so far.

The death toll has increased to 17,465 after 52 more deaths were reported in the past 24 hours, the release said.

A total of 410,033 patients have recovered as of Saturday.

The ministry on Saturday lifted stay-at-home order in six townships out of 119 townships.

Meanwhile, Five suspects were arrested in connection with vandalism of aircrafts in Myanmar, state media reported on Saturday.

A flight of Air KBZ which planned to fly to Heho of Shan state from Yangon was replaced with another one as leaves were found in both of the pilot tubes of the aircraft before its journey on Aug. 12, the report said.

Due to a malfunction of Auto Pilot System, the replaced flight had to return to the Yangon International Airport seven minutes after take-off from the airport and it was later found out that both pilot tubes were stuffed with leaves.

Another aircraft was replaced and leaves were found in its left pilot tube during the pre-departure inspection.

According to the state media's report, five staff of the airline involving a line maintenance manager have been arrested after investigation and the related suspects will soon be identified and arrested. - Xinhua 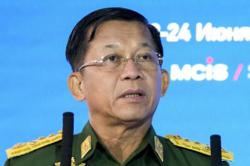