MANILA, Sept. 26 (Xinhua): Jail guards killed four inmates in a shootout on Sunday after they tried to escape from a prison in the southern Philippines' Surigao del Sur province, jail authorities said.

The Bureau of Jail Management and Penology said the incident occurred shortly before 7 a.m. local time when at least 11 inmates took hostage a jail staff preparing breakfast at the kitchen.

The bureau added that the inmates allegedly took the firearms of the jail personnel at the gate and used them to fire at the jail guards.

One of the inmates allegedly stabbed a jail guard using a blunt improvised weapon.

An investigation into the incident is underway.

This is the second major shootout incident in Southern Philippines in less than a week.

Six suspected communist rebels were killed in two separate clashes with government troops in the southern Philippines, the military said on Tuesday (Sept 21).

The first gunbattle erupted in the outskirts of Malaybalay City in Bukindon province, 847 kilometres south of Manila, on Monday, when troops swooped down on a suspected lair, said Mayor Francisco Garello Jr, an army spokesman.

Five rebels were killed in the fighting, while troops recovered about a dozen high-powered firearms in the the encampment, he added.

A sixth rebel was killed in a clash in a forested area in the nearby province of Agusan Del Norte on the same day, Garello said- Xinhua 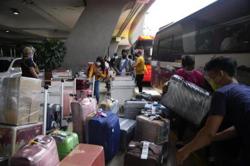