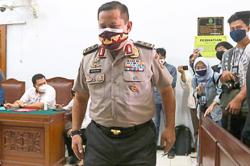 Legal challenge: Former head of the National Police’s international relations division, Insp. Gen. Napoleon Bonaparte, arrives at the South Jakarta District Court on Sept 28, 2020 to attend the hearing of the pretrial lawsuit that he had filed against his being named a suspect in a case involving fugitive graft convict Djoko S. Tjandra. - Jakarta Post/ANN

The investigation was opened following reports filed by Kasman, also known as Muhammad Kece, on Aug. 26 following the incident, which took place at Bareskrim’s detention center in South Jakarta and reportedly occurred in the early hours of that day.

Bareskrim’s general crimes director Brig. Gen. Andi Rian Djajadi said that Napoleon, after being questioned by investigators for 10 hours on Monday, testified that he had managed to gain access to Kasman’s cell by switching the padlock of the latter’s cell before he then proceeded to abuse Kasman.

“During the examination, it was revealed that, in addition to beating [Kasman], NB [Napoleon Bonaparte] also smeared the victim’s face and body with human feces that was previously prepared by the perpetrator,” Andi said on Monday, as quoted by kompas.tv.

Andi said on Thursday that Napoleon had yet to be named as a suspect for allegedly abusing Kasman, saying the police still needed to hear statements from other parties, as reported by tribunnews.com.

Napoleon allegedly abused Kasman with the help of three other inmates, one of whom is reportedly a former member of now-banned hard-line group the Islamic Defenders Front (FPI).

The incident took place shortly after Kasman was detained in Bareskrim’s detention facility on Aug. 25.

Kasman, who was a YouTuber, was reported to the police for one of his YouTube videos that allegedly contained blasphemous statements against Islam.

Prior to being questioned by the Police, Napoleon penned a public letter that outlined his reasons for abusing Kasman, arguing that the latter’s alleged blasphemous act had threatened the unity, integrity and religious harmony in the country.

Napoleon’s lawyer Gunawan Raka confirmed that the police general had written the letter, as reported by kompas.tv.

“I swear I will take measured action against anyone who dares [to insult Islam],” read the letter, as reported by tribunnews.com.

Napoleon was detained at Bareskrim’s detention facility awaiting the final verdict of his bribery case.

In his former capacity as the National Police’s international relations division head, Napoleon was found guilty of receiving S$200,000 and US$370,000 in bribes from Djoko in exchange for removing the latter's Interpol red notice, allowing Djoko to freely enter Indonesia last year despite being wanted by the police since 2009.

The Jakarta Corruption Court sentenced Napoleon on March 10 to a four-year prison sentence and a fine of Rp 100 million (US$7,105). Failure to pay the fine could result in an additional six months of prison time.

Napoleon challenged the decision at the Jakarta High Court, which on July had issued a ruling that upheld the lower court’s decision.

Following the ruling, he then filed a petition with the Supreme Court challenging the High Court’s ruling. - The Jakarta Post/ANN 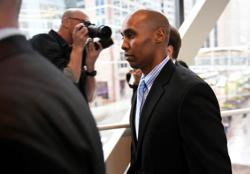