JAKARTA (The Jakarta Post/Asia News Network): Indonesia made the first big step toward becoming a hub for car battery and electric vehicle (EV) manufacturing in South-East Asia by embarking on the construction of a US$1.1 billion car battery factory in Karawang, West Java, last week, with production scheduled to start in mid-2024.

As part of a US$9.8 billion investment project, the factory, a joint venture of South Korean LG Energy Solution and Hyundai Group alongside Indonesian state-owned Battery Corporation, will have an initial capacity of 10 gigawatt hours of nickel-cobalt-manganese-aluminum lithium-ion battery cells to power 150,000 EVs.

But the plant is designed to eventually have a total capacity of 30 GWh. Endowed with 25 per cent of the world’s reserves of nickel, which makes up 40 per cent of the basic materials of lithium batteries, Indonesia indeed has a strong comparative advantage not only to become one of the world’s largest producers of car batteries but also a major production base for EVs.

Analysts have estimated that Asian EV sales will expand by almost 25 per cent in 2022 as major economies in the region have pledged to achieve carbon neutrality: Japan and South Korea in 2050, China in 2060 and Indonesia in 2070.

Korea’s huge investment in the car battery and EV production is also quite a strategic step for Korean car manufacturers to gain a bigger share of the car market in Indonesia, which has been largely controlled by Japanese companies.

The manufacturing of car batteries will be a big jump in the development of the upstream and downstream processing of nickel ores.

As part of the enforcement of the 2019 Mining Law, which phased out mineral ore exports, investors, notably those from China, have rushed to build nickel smelters.

According to the Energy and Mineral Resources Ministry, three smelters in Morowali, Central Sulawesi, have been producing and exporting nickel pig iron and stainless steel slabs, and over 30 smelters are under construction in Kalimantan, Central, South and Southeast Sulawesi, as well as Halmahera Island in North Maluku.

The government expects the acceleration of EV manufacturing and the strong push into solar power will greatly reduce Indonesia’s huge oil imports and cut down its carbon emissions.

The problem however, is that most of the nickel smelters already in operation and those under construction have been designed to be powered by coal-fired electricity generation.

The coal-fired power generation in Morowali, for example, has had to be expanded to almost 3,000 MW to support the three smelters.

The lack of power generation using renewable energy is the main problem in developing the upstream and downstream mining industries. Power generation usually accounts for 30 to 35 per cent of the total investment of a smelter.

The dilemma is that renewable energy such as hydropower and geothermal is not always available near nickel mines. But the government cannot simply sidestep this energy problem and continue to use the abundantly available coal.

The international market will not accept car batteries or EVs from Indonesia if their manufacturing is mostly powered by fossil fuels.

The promotion of EVs as cutting carbon emissions would not be effective if the nickel smelting and car battery production are fired mostly by fossil fuels. 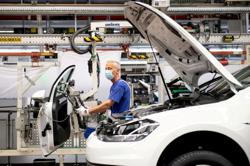