A worker removes a barricade along a street in Hanoi on Tuesday (Sept 21, 2021)following the easing of social-distancing orders after two months due to Covid-19 coronavirus restrictions. - AFP

HANOI, Sept 21 (Xinhua): Non-essential services including hair salons and restaurants across the Vietnamese capital Hanoi reopened on Tuesday due to the city's easing restrictions over Covid-19.

The reopening was based on a circular released by municipal authorities on Monday, which also announced the removal of travel permits for inner-city commuters starting from Tuesday.

According to the circular, coronavirus-related prevention and control measures in the city have now been adjusted in line with the Vietnamese Prime Minister's Directive 15, representing a downgrade from the stringent measures applied since July 24.

Specifically, food and drink establishments are permitted to reopen for takeaway and delivery services only and must close before 9 p.m. every day, and some other daily life services including traditional markets and stores selling stationery and textbooks also reopened.

However, certain tight control measures will remain in place until the capital city completes administering second doses of the COVID-19 vaccine for all adults, the circular said.

Over the past two weeks in Hanoi's fourth period of the strictest social distancing beginning July 24, the number of new confirmed cases declined significantly to a daily average of 28, compared to 71 in the initial two weeks of the cited period, according to the municipal department of health.

As of Monday, Hanoi has administered over 5.5 million doses of Covid-19 vaccines for over 83 percent of its adult population, the department said. Enditem 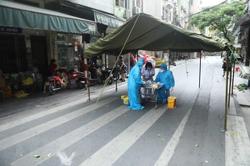