Tourists walk inside Fort Santiago at the walled-city of Intramuros in Manila, Philippines as some tourist spots reopen to the public with health restrictions since Thursday (Sept 16, 2021). The govt started the pilot run of granular or more localized lockdowns starting Thursday in the capital as they try to open up the economy while controlling the surge of Covid-19 infections. - AP

World Health Organisation (WHO) Representative in the Philippines Rabindra Abeyasinghe said the active cases now is twice the number of active cases reported in April when the country battled a surge of infections.

The Department of the Interior and Local Government said 57 areas with active virus clustering in Metro Manila are now under hard lockdown.

Residents in lockdown areas, such as a street or a building, are not allowed to leave houses during the period.

The government placed Metro Manila, home to over 13 million people, under alert level 4 on a scale of 5 for two weeks due to the region's high or increasing infections and high utilization of hospital beds. The government urges people to stay at home.

However, it also allows some businesses to operate at a limited capacity, including restaurants and salons.

The Philippines, which has around 110 million population, has tested nearly 19 million people since the outbreak in January 2020. On Sept. 11, the DOH reported its highest ever daily tally with 26,303 cases. - Xinhua 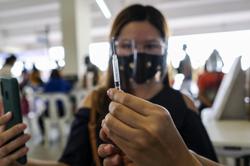