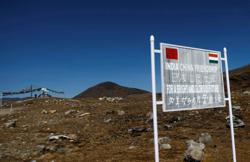 China and India have stressed the need for troop withdrawals from an area of a deadly confrontation on their border for bilateral relations to progress.

Chinese Foreign Minister Wang Yi and his Indian counterpart Subrahmanyam Jaishankar discussed the tensions on their Himalayan border on the sidelines of a regional security conference in Dushanbe on Thursday.

“It is hoped that the Indian side will meet the Chinese side halfway to promote the continued stability of the situation.

“It is necessary to consolidate the results of the disengagement of frontline forces and strictly abide by the agreements and consensus reached between the two countries.”

Wang said China and India should not pose threats to each other, and should expand cooperation to ensure ties were on a healthy track.

Jaishankar said he discussed the border tensions in the meeting.

“Discussed disengagement in our border areas. Underlined that progress in this regard is essential for restoration of peace and tranquillity, which is the basis for development of bilateral ties,” he said on Twitter.

Indian and Chinese came to blows in the western Himalayas in June last year when animosity over a decades-old border dispute blew up and soldiers from both sides engaged in deadly hand-to-hand fighting. At least 20 Indian and four Chinese soldiers died in the clashes.

It was the deadliest skirmish since the 1962 border war and it quickly developed into a military stand-off. Both sides increased the build-up of infrastructure and sent extra troops and equipment to the region.

Military commanders held several rounds of talks in the aftermath and forces retreated from some sections of the border. The two sides have held 12 rounds of negotiations, and the 13th round is expected to be held soon.