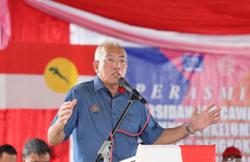 An enthusiastic user of social media, Hun Sen said that on Friday (Sept 17) he intruded into the Zoom call to warn his opponents that he and his spies were keeping a close eye on them.

The Sept 9 call was held by former members of the Cambodia National Rescue Party, which a court dissolved in 2017.

Cambodia's courts are widely seen as doing the bidding of Hun Sen's government, in this case eliminating the sole credible opposition party ahead of the 2018 election. The party had been expected to present a strong challenge to Hun Sen’s Cambodian People’s Party, which instead swept the parliamentary polls.

Clips of part of Hun Sen's sudden intrusion on the video call have been circulating on social media. They show Hun Sen holding a 12-minute conversation with Long Ry, a former opposition lawmaker.

In their chat, Hun Sen complained that members of the former opposition party insulted him personally even though, he claimed, he had tried to promote a "culture of dialogue.”

A spokesman for Hun Sen’s party, Sok Eysan, initially denied that the intrusion and exchange had taken place, saying the video clip was a fabrication.

Hun Sen, however, during a live television broadcast Friday opening a COVID-19 vaccination campaign for children, acknowledged the exchange and said he had listened in on about 20 previous calls of his opponents without revealing his presence or showing his face.

He also wrote on his Facebook page about his exploit, stressing that he had not been reaching out to negotiate, but to warn them against disruptive activities.

U.S. government-funded Radio Free Asia quoted Long Ry as saying that Hun Sen was able to join the Zoom meeting because one of his team members shared the meeting link or password with others so they could listen. He said he would be happy to invite Hun Sen to future meetings to discuss national issues.

"But morally, when people sneak a peak into our affairs, we are not happy,” it quoted Long Ry as saying. "In politics, I think we should employ honest and straightforward methods, and not take advantages of others by secretly sneaking into their affairs.”

Most senior members of the Cambodia National Rescue Party fled into exile after the party was dissolved. Hun Sen has been in power for more than 36 years and said repeatedly he has no intention of stepping down soon. Human rights groups and Western nations accuse his government of suppressing democratic and human rights.

Crashing other people's Zoom conferences became a small fad last year when use of the application skyrocketed during the pandemic as many people began working at home. It is usually accomplished by obtaining a password, which is often casually circulated to invitees. - AP 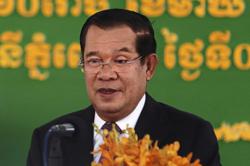