CHENGDU: Three people were confirmed dead and 88 others were sent to hospital after a 6.0-magnitude earthquake jolted Luxian County in the city of Luzhou in southwest China’s Sichuan Province.

Among those hospitalised, three were seriously injured, according to the city’s emergency management bureau.

A total of 890 commanders and fighters from nearby fire-fighting and rescue brigades were mobilised, while another 4,600 rescue workers were on standby.

As of Thursday morning, the loss figures were as follows: 737 collapsed houses; 72 houses with serious damage; and 7,290 damaged to some extent.

Collapsed walls and houses were seen on the way to rain-battered Jiaming Township in the epicentre area. Electricity in most of the houses in the town had been suspended.

The provincial department of finance had allocated 50 million yuan (RM32.2mil) to support disaster-relief efforts, including the settlement of affected residents.

Lai Jianrong, a Fuji local, said she felt a mild tremor at around 4am on Thursday, and ran out barefoot in her nightgown when the tremors became intense.

“Some bricks fell off the wall and I didn’t dare to go in again,” she said. She was moved to the temporary shelter in the morning.

More than 6,900 affected residents were relocated and over 10,000 people shifted to temporary shelters as of early Thursday morning, said the local government.

According to the China Earthquake Networks Centre, the epicentre of the earthquake was monitored at 29.2° north latitude and 105.34° east longitude. The quake struck at a depth of 10km.

Approved by the provincial government, the earthquake relief headquarters of Sichuan had activated a level-II response, the second-highest in China’s four-tier earthquake emergency response system. — Xinhua 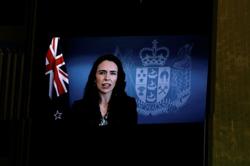