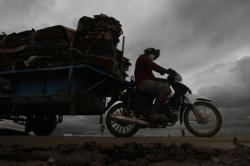 PHNOM PENH, Sept 17 (Phnom Penh Post/ANN): As of Friday, more than 50,000 Cambodian migrant workers in Thailand have been vaccinated against Covid-19, according to Prime Minister Hun Sen.

Speaking during the launch of Covid-19 vaccinations for children aged 6-11 at the Peace Palace in Phnom Penh on the morning of September 17, Hun Sen said the majority of returning migrant workers tested positive, most of them for the coronavirus Delta variant.

He noted that there are currently more than 7,000 workers remaining in quarantine sites on the Cambodian-Thai border.

He said the capital and Kandal were previously the country's main Covid-19 hotspots but have now brought the situation largely under control with significantly lower transmission cases and deaths. Thanks to vaccinations, he said, those who still contracted the virus despite having received the jabs only had mild symptoms.

"Once you have antibodies after vaccination, you won't develop severe symptoms when you contract the virus. But don't rely on vaccine alone, you need to continue adhering to health and administrative measures to protect yourself and the community," he said.

Meanwhile, Cambodia's Covid-19 total cases have climbed to 102,136 on Thursday night (Sept 16)after 693 fresh infections were reported across the country, the Ministry of Health (MoH) said in a statement.

According to the MoH, the new infections included 581 domestic cases and 112 imported cases. Eleven more fatalities had been recorded, taking the overall death toll to 2,078. Additional 443 patients have recovered, lifting the total number of recoveries to 95,810.

With its total population of 16 million, Cambodia launched a Covid-19 vaccination drive for 10 million adults in February and for nearly 2 million adolescents aged from 12 to under 18 years in August.

MoH's secretary of state and spokeswoman Or Vandine said 9.78 million adults and 1.71 million adolescents had received their first vaccine dose, accounting for 71.9 percent of the total population.

Almost all of the COVID-19 vaccines used in the country's inoculation campaigns are China's Sinovac and Sinopharm. - Phnom Penh Post/ANN