YANGON, Sept 17 (Xinhua): The number of Covid-19 infections has increased to 440,741 in Myanmar after 1,790 new cases were reported in the past 24 hours, according to a statement from the Ministry of Health on Thursday night (Sept 16).

The total cases reported on Thursday was among lowest stated in months.

The statement said that 85 more deaths were reported, bringing the death toll to 16,869 so far.

A total of 391,268 patients have recovered as of Thursday.

Earlier, four million more doses of China's Sinopharm Covid-19 vaccines arrived in Myanmar's Yangon on Sunday, according to a statement from the Chinese Embassy in Myanmar.

So far, China has supplied 12.6 million doses of Covid-19 vaccines to Myanmar, of which 3.9 million doses were donated by China, the statement said. 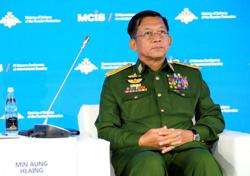