Schooling, 26, and Quah Zheng Wen, 24, a former Olympic swimming semi-finalist, "will proceed to fulfil their NS (national service) requirements, as they agreed to when they applied for deferment," the ministry announced.

Schooling's service was scheduled to start in 2014 but was deferred to facilitate him competing in top-level international swimming.

He went on to defeat multiple champion Michael Phelps in the 100-metre butterfly final at the Rio de Janeiro Games, prompting rare celebrations in Singapore for their first-ever Olympic gold medal.

However, he made little impression at this year's Tokyo Games, trailing last in his heat.

Schooling said on Thursday that he was "very grateful" for the government's support and described himself as "honoured to serve" his country.

“As a son of Singapore, I am honoured to serve my country,” he said. “More importantly, now more than ever, my family needs me. It is time for me to fulfill my filial duties.” - dpa 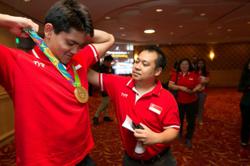