Home schooled: Larrobis, a first grade student, practising her writing exercises at her home in Quezon City, Manila, ahead of another school year of remote lessons in the country due to the pandemic. — AFP

Classrooms here were silent on Monday as millions of school children hunkered down at home for a second year of remote lessons that experts fear will worsen an educational “crisis”.

While nearly every country in the world has partially or fully reopened schools to in-person classes, the Philippines has kept them closed since the start of the coronavirus pandemic, the UN says.

President Rodrigo Duterte has so far rejected proposals for a pilot reopening of primary and secondary schools for fear children could catch Covid-19 and infect elderly relatives.

“I want to go to school,” seven-year-old Kylie Larrobis said, complaining she cannot read after a year of online kindergarten in the tiny slum apartment in Manila she shares with six people.

“I don’t know what a classroom looks like – I’ve never seen one.”

Larrobis, who enters first grade this year, cries in frustration when she cannot understand her online lessons, which she follows on a smartphone, said her mother, Jessielyn Genel.

Her misery is compounded by a ban on children playing outdoors.

“What is happening is not good,” said Genel, who opposed a return to in-person classes while the Delta variant ripped through the country.

It has been plagued with problems: most students in the Philippines don’t have a computer or internet at home.

More than 80% of parents are worried their children “are learning less”, said Isy Faingold, Unicef’s education chief in the Philippines, citing a recent survey.

Around two-thirds of them support the reopening of classrooms in areas where virus transmission is low.

“There was already a learning crisis before Covid... it’s going to be even worse now,” he said.

Fifteen-year-olds in the Philippines were at or near the bottom in reading, mathematics and science, according to OECD data.

Enrolments fell to 26.9 million in the 2020 school year and were down a further five million days before lessons restarted on Monday, according to official figures. 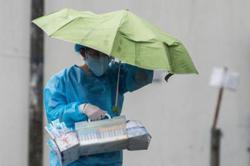