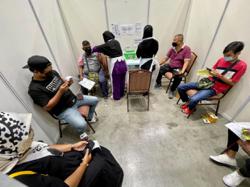 The symbolic handover ceremony of vaccine donation in Hanoi on Sept 14, 2021. — VNA/VNS

HANOI (Vietnam News/Asia News Network): The foreign ministry held a ceremony in Hanoi to symbolically receive 1.5 million doses of AstraZeneca Covid-19 vaccines donated to Vietnam from the governments of Italy and France via Covax.

Speaking at the ceremony, Vietnamese deputy foreign minister Tô Anh Dũng expressed gratitude towards the two European countries for their contributions to Vietnam's Covid-19 fight, saying that this donation represents the dynamic growth of the strategic partnership between Vietnam and France and Italy in recent years, as well as showcases the spirit of unity and solidarity in challenging times.

The Vietnamese diplomat reiterated appreciation for the Covax initiative with its goal to ensure equitable and fair access to vaccine supply, and noted that France and Italy are among the biggest European donors to the scheme.

Dũng said he believed French and Italian governments and people’s help to Vietnam – as well as to Asean in general – will help speed up the reopening process, facilitate travel for businesses and people.

Vietnamese deputy health minister Trần Văn Thuấn said the ministry would timely allocate the vaccine doses to localities and use them effectively.

On behalf of the Italian Government, Paolo Epifani, Charge d’Affaires at the Italian Embassy in Vietnam, said he highly valued Việt Nam’s efforts in pandemic containment, and is happy to contribute to Vietnam's vaccination drive.

“Since the beginning of the pandemic, Italy has been among the first countries to support the importance of equal and universal access to vaccines, treatments and tests for Covid-19, based on a principle of international solidarity according to which no one will be safe until everyone is safe," he said.

"With this donation, France is demonstrating its solidarity with Vietnam through these difficult times: we stand together with the people of Vietnam, as the country is facing a severe epidemic wave, by supporting vaccination efforts launched by the authorities," said French Ambassador to Vietnam, Nicolas Warnery.

"This support is in line with the longstanding and successful cooperation between France and Vietnam in the medical field," he noted.

Ambassador Nicolas Warnery added that "vaccination is the only way out of this crisis. That is why France is committed to share 60 million doses in 2021, in addition to its financial contributions to the Covax programme, in order to accelerate vaccination efforts worldwide. More broadly, France has been a major supporter to the ACT-A initiative which provides universal access to tests and treatments to fight Covid-19”.

On behalf of Covax, Kidong Park, Representative of the World Health Organisation (WHO) in Vietnam, are grateful for donations, which brought the total vaccines that Covax supplied to Vietnam to 11.7 million doses.

"As we get more vaccines for the country, it is critical for the Government to provide vaccines strategically to the people who need it the most, based on priorities. This means protecting health care workers and frontline workers, the elderly, people with co-morbidities and those who are at highest risk of severe diseases or deaths,” the WHO official stressed.

“Unicef welcomes the donations of Covid-19 vaccines by the Governments of France and Italy through the Covax dose-sharing mechanism, which allows well-supplied countries to share vaccine doses with other countries to help protect the most at-risk populations globally”, said Lesley Miller, Deputy Representative of Unicef in Vietnam.

“Equitable access to Covid-19 vaccines represents the clearest pathway out of this pandemic for all of us — children included, and these donations are an important step in this direction”

To date, more than 30 million doses of Covid-19 vaccines have been administered in Vietnam, with nearly 5.5 million people having been fully inoculated. 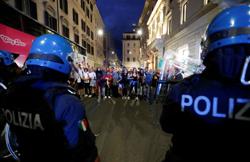 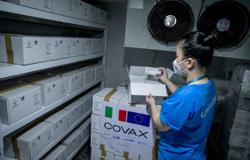 New Japan PM sends offering to controversial Yasukuni shrine
Experts see less need to test migrant workers in Singapore for those who do not have Covid-19 symptoms
Thailand: Public Health Ministry to consider second Pfizer jab for schoolchildren next week
Vietnam September exports down 0.7% m/m at US$27.03 billion; its coffee exports also down by 10.2%
Philippines announces that Malaysia remains as one of its top trading partners and investment sources
In a rare move, Myanmar makes bold decision in excluding Asean from its summit
Cambodia shortens quarantine time for fully vaccinated inbound travellers
Gleaming new train arrives ahead of railway opening for usage at the Laos-China Railway
Brunei: Youth as agents of change for climate solution
Bukit Aman, Australian police to work together over drug case after arrest of M’sian, seizure of 450kg heroin