She added that the IATF meeting is an avenue for different sectors to discuss and harmonize their takes on the pandemic to better serve the public.

"If there is someone who has a different view with you, you do not have the right to react the way Secretary Roque did. That’s why there is an IATF to listen to everyone." Robredo explained during the BISErbisyong LENI program on DZXL.

"If you do not agree, it is okay to say that you disagree. But you do not have the right to bully or humiliate," the vice president added.

Robredo noted that Roque’s anger is “misplaced” as the doctors only represent their sector which is the frontline in the COVID-19 pandemic.

She further said that if there was anyone who is politicizing amid the Covid-19 pandemic, it was those running the government under President Rodrigo Duterte.

"Who would wish for the government to fail? If there’s anyone politicking, it’s them." - Philippines Daily Inquirer/ANN 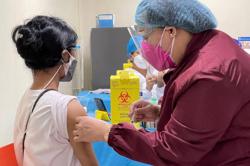