Proud parents: Kai Kai opening a box to release blue confetti during a ‘gender reveal’ event for a new cub with his mate Jia Jia (below) that was announced to be a boy in Singapore. — AFP/The Straits Times/ANN

The first-ever cub born in Singapore to giant pandas Kai Kai and Jia Jia is a healthy baby boy.

The panda cub was born on Aug 14 at the River Safari after seven attempts by its parents to conceive.

Wildlife Reserves Singapore (WRS) said that its panda care team determined the cub’s gender through a series of visual assessments.

The WRS team, led by animal care officer Trisha Tay Ting Ni, subsequently confirmed that the baby panda was male after consulting a team of experts from the China Conservation and Research Centre for Giant Panda (CCRCGP).

The CCRCGP experts examined a series of photos and videos that were shared by the WRS panda care team and gave their feedback.

Dr Cheng said: “The panda care team has decided to allow this period of maternal care to continue for the duo to strengthen their bond. While supporting Jia Jia’s care of the cub, we were able to determine the cub’s gender through close visual observation and will only retrieve the cub for veterinary checks when the time is right.” The cub will be given a name before its 100-day milestone on Nov 21, and a judging panel chaired by Tan Chuan-Jin, Speaker of Parliament and deputy chairman of Mandai Park Holdings, will oversee the process.

The name should be catchy and easy to remember, with positive meanings and attributes as well as relevance to Singapore’s heritage and culture. It must also be significant to the friendship between Singapore and China, WRS said.

The panel will also include representatives from academia, the Chinese Embassy in Singapore, relevant government agencies and WRS.

Submissions for the name will close at 11.59pm on Sept 19. The shortlisted names will be released for public voting.

Details on how members of the public can participate in naming the cub can be found on WRS’ website.

WRS said that in the past month, the cub has started to develop prominent black markings around the eyes and ears, and on the body.

Its fur is expected to be fully grown in the next few weeks and it will soon open its eyes. — The Straits Times/ANN 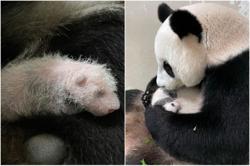 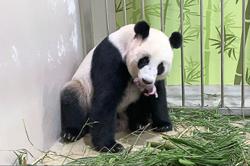