JAKARTA, Aug 31 (Reuters): Indonesia's President Joko Widodo has announced that the government would adjust Covid-19 restrictions from Aug 31 to Sept 6 due to improvements in the infection rate in more areas.

More parts of densely populated Java island have been lowered from the most severe "Level 4" category. Details of the adjustments would be announced by cabinet ministers, said Jokowi, as the president is known.

The Straits Times reported that More areas of Indonesia, including the cities of Solo in Central Java and Malang in East Java, will see Covid-19 restrictions eased for a week, starting from Tuesday (Aug 31) as the number of cases continues to decline in the country.

Last week, the authorities eased curbs in Greater Jakarta, Bandung in West Java and Surabaya in East Java, along with a few other regions.

Places of worship were allowed to reopen with 25 per cent capacity or 30 worshippers at the maximum.

Similarly, restaurants could accept diners so long as capacity was restricted to 25 per cent. Visitors to shopping centres and malls were capped at half their overall capacity.

President Joko Widodo said on Monday that the positivity rate had decreased, while the average bed occupancy rate in hospitals nationwide had dropped to 27 per cent.

He also urged Indonesians to remain vigilant, noting that many countries had faced another wave of Covid-19 despite impressive vaccination rates.

"We must collectively attempt to prevent Covid-19 cases from soaring again. The key is simple - get vaccinated and be disciplined in implementing health protocols," Widodo said in a live-streamed statement.

Luhut Pandjaitan, a senior minister in charge of Covid-19 emergency response, said the number of infections nationwide had dropped by 90.4 per cent since July 15, when Covid-19 cases peaked.

The situation was even better in populous Java and Bali islands, where the tally of confirmed cases plunged by 94 per cent.

"As the Covid-19 situation becomes increasingly better, the health protocols are implemented and the PeduliLindungi application is in use, some adjustments of public activities are doable," he said at a virtual press conference on Monday.

The PeduliLindungi application shows proof of vaccination and the Covid-19 situation in one's surrounding areas, among other things, and is now used by visitors to check into public places such as malls.

As part of the easing of measures, all industrial firms and factories can operate fully as long as their staff are divided into two shifts and report for work with the PeduliLindungi application, among other requirements.

Indonesia, the hardest hit by Covid-19 in South-East Asia, reported 5,436 fresh infections on Monday, bringing the overall number of cases in the country to 4.08 million.

The number of deaths nationwide rose by 568 in the past 24 hours, bringing the total death toll to 132,491. - The Straits Times/ANN 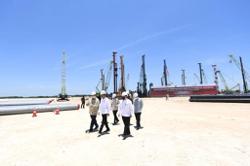