Lacklustre response: Passengers disembarking from a speedboat at Rassada Pier in Phuket under the Phuket Sandbox programme. — Bloomberg

Visitors to Thailand’s resort island of Phuket in July were at just one per cent of pre-pandemic levels, said an official, as a bid to revive tourism to the South-East Asian country gets off to a slow start amid its biggest Covid-19 outbreak yet.

The island reopened last month under the Phuket Sandbox programme to fully vaccinated tourists who could skip Thailand’s mandatory two-week quarantine provided they remained on Phuket, where tourism accounts for 90% of the local economy.

“In the past, we were looking at 43,000 daily arrivals, so what we got was one per cent of normality.

“One per cent in business terms is not okay, but it also gives hope,” he added. “We’re seeing the light. It’s encouraging.”

Tourism before the pandemic was a key driver of Thailand’s economy, accounting for 12% of gross domestic product.

In 2019, the country welcomed 40 million foreign arrivals, of which 10 million visited Phuket.

The Finance Ministry recently slashed its forecast for foreign arrivals to 300,000, down from an earlier prediction of 2 million.

Phuket has kept infections low with a seven-day average of 35 cases compared with the national average of 18,400. But the number of people with bookings for August stood at just 9,000 so far, Bhummikitti said, as Thailand grapples with a surge in Covid-19 cases.

The daily total of new cases broke the 20,000 threshold for the first time on Wednesday, a feat repeated yesterday.

Authorities announced 160 more deaths yesterday, taking the total to 5,663 since the pandemic began.

“People looking from overseas will see that the numbers are scary,” Bhummikitti said. — Reuters 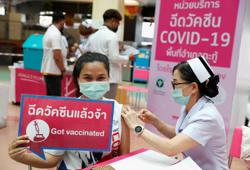