THE country’s ambassador to the United Nations, who has refused to leave his post despite being fired after the February coup, has alerted the world body to a “reported massacre” by the military junta.

Kyaw Moe Tun (pic) sent a letter to UN Secretary-General Antonio Guterres on Tuesday saying 40 bodies had been found in Kani township in July in the Sagaing area of northwestern Myanmar.

The junta has denied the massacre, while AFP has not been able to independently verify the reports due to mobile networks being cut in the remote region.

The representative wrote that soldiers tortured and killed 16 men in a village in the township around July 9 and 10, after which 10,000 residents fled the area.

He said a further 13 bodies were discovered in the days following clashes between local fighters and security forces on July 26.

Kyaw added that another 11 men, including a 14-year-old boy, were killed and set on fire in a separate village on July 28.

In the letter, the ambassador repeated his call for a global arms embargo on the ruling junta and “urgent humanitarian intervention” from the international community.

“We cannot let the military keep on doing this kind of atrocity in Myanmar,” Kyaw said.

“It is time for the UN, especially the UN Security Council, to take action.”

Myanmar has been in turmoil since the army ousted the civilian leadership on Feb 1, launching a crackdown on dissent that has killed more than 900 people, according to a local monitoring group.

Kyaw has passionately rejected the coup and brushed aside the junta’s claims that he no longer represents Myanmar.

The UN still considers him as the rightful envoy.

The representative was sacked by the junta in February a day after he gave a three-finger salute at the UN General Assembly following an impassioned speech calling for the return to civilian rule.

The gesture, inspired by the Hunger Games films, was widely used by pro-democracy demonstrators.Kyaw, who has repeatedly called for international intervention to help end unrest in Myanmar, said on Wednesday that US authorities had boosted his security after an apparent threat was made against him.

“The police and the security authorities here in New York are working on it,” he added, without giving details about the nature of the threat. — AFP 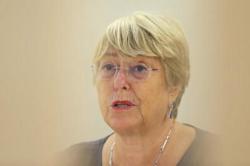