PHNOM PENH (Xinhua): Cambodian Deputy Prime Minister and Foreign Minister Prak Sokhonn has reiterated the country's support for the elevation of Asean-China relations to a comprehensive strategic partnership, according to a foreign ministry's statement on Wednesday (Aug 4).

Sokhonn made the remarks during the Asean-China Ministerial Meeting via video link on Tuesday.

"In acknowledging the most substantive partnership that Asean and China have achieved since the establishment of dialogue relations, he reiterated Cambodia's support for the elevation of Asean-China ties to a Comprehensive Strategic Partnership," the statement said.

During the meeting, Sokhonn also underlined the need to ensure that cross-border trade and supply chains remains unimpeded to take full advantage from the upgrading of the Asean-China Free Trade Area (ACFTA) and the Regional Comprehensive Economic Partnership (RCEP).

He also emphasised the importance of enhancing the implementation of the Asean-China Joint Statement on Synergizing the Master Plan on Asean Connectivity (MPAC) 2025 and the Belt and Road Initiative (BRI).

According to the statement, the meeting noted with satisfaction the achievements of Asean-China Dialogue Relations and applauded the fruitful outcomes of the Special Asean-China Foreign Ministers' Meeting held on June 7-8, 2021 in China's Chongqing as part of the celebration of the 30th Anniversary of Asean-China relations.

It added that the meeting looked forward to the 24th Asean-China Summit to commemorate the 30th anniversary of Asean-China Dialogue Relations.

"On the fight against the Covid-19 pandemic, while Asean expressed appreciation to China for the extensive regional support, China further reiterated the commitment to strengthen cooperation with Asean, including through the support of regional capacity in the production and distribution of vaccines and medical supplies as well as recovery efforts," the statement said.

"Both sides reaffirmed the commitment to maintain peace, security and stability in the region," it added. 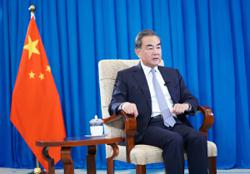