SEOUL: The powerful sister of North Korean leader Kim Jong-un warned that next month’s annual military drills between South Korean and US troops will undermine prospects for better ties between the Koreas, just days after the rivals reopened their long-dormant communication channels.

Kim Yo-jong’s statement on Sunday carried by state media targets only South Korea, and this could add credence to a theory that North Korea’s decision to restore the communication lines is mainly aimed at pushing Seoul to convince Washington to make concessions while nuclear diplomacy remains deadlocked.

“For some days I have been hearing an unpleasant story that joint military exercises between the South Korean army and the US forces could go ahead as scheduled,” Yo-jong said.

“I view this as an undesirable prelude which seriously undermines the will of the top leaders of the North and the South wishing to see a step taken towards restoring mutual trust and which further beclouds the way ahead of the North-South relations.

“Our government and army will closely follow whether the South Korean side stages hostile war exercises in August or makes other bold decision,” she added.

Regular drills between Seoul and Washington have been a long-running source of animosities on the Korean Peninsula, with North Korea calling them an invasion rehearsal and responding with missile tests. South Korea and the US have repeatedly said their drills are defensive in nature.

In the past few years, South Korea and the US have cancelled or downsized some of their exercises to support diplomatic efforts to end the North Korean nuclear crisis or because of the Covid-19 pandemic. — AP 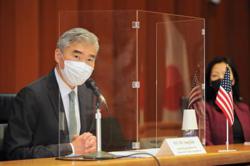