In this file photo taken on March 19, 2021, protesters take cover behind makeshift barricades during a demonstration against the military coup in Yangon's Thaketa township. - Myanmar's junta chief said on August 1, 2021 that elections would be held and a state of emergency lifted by August 2023, extending the military's initial timeline given when it deposed Aung San Suu Kyi six months ago. The country has been in turmoil since the army ousted the civilian leader in February, launching a bloody crackdown on dissent that has killed more than 900 people according to a local monitoring group. - AP

YANGON, Aug. 1 (Xinhua) -- Myanmar expects to hold new general elections in the second half of 2023 after its preparations to be taken for six months by August, Commander-in-Chief of Defence Services Sen-Gen Min Aung Hlaing, chair of the newly formed State Administration Council, said in his televised message to the public on Sunday.

"The constitution states the limitation for the duration of the state of emergency. According to subsection (b) of Section 421, if one cannot accomplish the duties within one year of the emergency period, it permits only two extensions of the prescribed duration for a term of six months for each extension. In the meantime, we have to do the things that should be done.

"Then, we will take six months by August 2023 to prepare for the election according to the law," Min Aung Hlaing said.

The state power has been held by the Commander-in-Chief of Defence Services Sen-Gen Min Aung Hlaing for six months since a state of emergency was declared in Myanmar on Feb. 1 this year.

Myanmar also formed a Republic of the Union of Myanmar Caretaker Government, according to an order by the State Administration Council on Sunday.

Under the order, the new caretaker government will be led by Commander-in-Chief of Defence Services Sen-Gen Min Aung Hlaing as prime minister and Vice Sen-Gen Soe Win as deputy prime minister.

The Union Election Commission cancelled on July 27 the results of the previous multi-party general elections held on Nov. 8 last year as the elections were not held in line with laws and were not fair.

The National League for Democracy won a majority of seats in both houses of the Union Parliament in previous general elections.

Min Aung Haling said, "We will hold briefings on findings of the previous general elections to international delegates in the near future."

He also pledged to work with the Association of South-East Asian Nations. - Xinhua 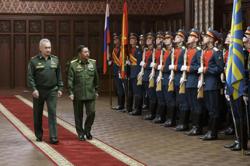