Vietnam is facing a surge in Covid-19 infections, with several areas including Hanoi and commercial hub Ho Chi Minh City put under lockdown to try to contain the outbreak.

The South-East Asian country -- which has a population of nearly 100 million people -- has been slow to procure and administer vaccines, with just 4.8 million doses given as of Tuesday.

But Vietnam has shown increasing interest in securing deals on technology transfers of Covid-19 vaccines.

The report also said all sides have signed a confidentiality agreement, and the health ministry is preparing a plan to conduct phase three clinical trials for Shionogi's vaccine in Vietnam.

It is hoped the vaccine will be brought to the market in June 2022.

A Vabiotech representative declined to comment when contacted by AFP, while AIC was not immediately available.

It comes after Russia announced last week that a test batch of the Sputnik V coronavirus vaccine was produced for the first time in Vietnam, following a deal between Vietnam's state-owned pharmaceutical company Vabiotech and the Russian Direct Investment Fund.

She did not specify the name of the company, but said production could begin in the fourth quarter of this year or the first quarter of 2022. 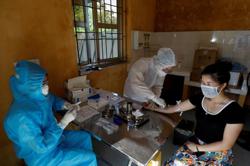