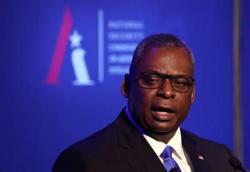 US Defence Secretary Lloyd Austin and Defence Minister Ng Eng Hen at the Mindef headquarters on July 27, 2021. - The Straits Times/ANN

SINGAPORE, July 27 (Bernama): United States (US) Secretary of Defense Lloyd J. Austin III is in Singapore for an introductory visit, according to the republic’s Ministry of Defence (MINDEF).

He was welcomed by a Guard of Honour at the ministry this morning before a bilateral meeting with Minister for Defence Dr Ng Eng Hen, said MINDEF in a statement today.

During the meeting, MINDEF said Dr Ng and Secretary Austin reaffirmed the excellent and long-standing bilateral defence relations between Singapore and the US.

Both sides expressed satisfaction that military cooperation continued to be strong despite the COVID-19 pandemic, it said.

Dr Ng and Secretary Austin also exchanged views on geopolitical developments and regional security issues, and agreed on the importance of the US’ continued engagement in region, said the ministry.

In a joint statement released after their meeting, both recognised the positive trajectory of bilateral defence relations that has expanded into new areas of cooperation such as cyber defence and Humanitarian Assistance and Disaster Relief.

MINDEF said the defence establishments of Singapore and the US interact regularly through military-to-military exchanges, training and cross-attendance of courses, and defence technology cooperation.

Both defence establishments also provide long-standing support for each other’s forces in their home countries, it said.

In 2019, both countries renewed the 1990 Memorandum of Understanding (MOU) Regarding US Use of Facilities in Singapore and signed an MOU concerning the establishment of a Republic of Singapore Air Force Fighter Training Detachment at Andersen Air Force Base, Guam.

Earlier this year, both sides also announced the US Department of Defense’s selection, in consultation with MINDEF, of Ebbing Air National Guard Base, Arkansas, as the preferred location to host the RSAF’s future F-35B fighter aircraft, as well as F-16 fighter training detachment which will be relocated from Luke Air Force Base, Arizona.

It is Secretary Austin’s first visit to Singapore as the US Secretary of Defense, said MINDEF.

He is expected to wrap up his visit on Wednesday (28 July).. - Bernama